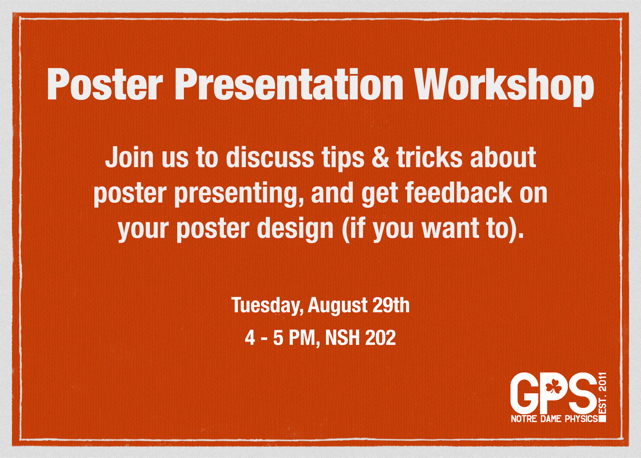 Do you like Chipotle? Do you enjoy supporting GPS by eating Chipotle? Do you want to learn how to make and present a better poster?
If you answered yes to any of the above questions, you are in luck tomorrow! From 4-5 PM in Nieuwland Science Hall 202 we will have a workshop about how to design effective posters and discuss tips on presenting posters. Then from 5-9 PM, the GPS conference will be having a fundraiser at the Eddy Street Chipotle. If you join us at Chipotle and show this flyer with your purchase (either printed or on your phone), the GPS conference will receive 50% of the profits!!! Don’t miss this chance to support GPS by eating burritos because they don’t come around often.
Also, if you love Chipotle but hate long lines, you can participate in the fundraiser by ordering online IF you pay for your order in store and show the flyer.

We are pleased to announce the 2016 GPS Fall Conference! The conference will be on Wednesday, November 30th this year.

The schedule is as follows:

6:30PM – Dinner in NSH 202, please register to make sure we have enough for everyone!

The use of synthetic quantum systems makes it possible to study phenomena that cannot be probed by conventional experiments. We created synthetic molecules using atomic manipulation and directly imaged the chemical bonds using tunneling spectroscopy.  These synthetic systems allow us to probe the structure and electronic properties of chemical bonds in molecules, including those that would be unstable in nature, with unprecedented detail. The experimental images of electronic states in our synthetic molecules show a remarkable match to the charge distribution predicted by density functional theory calculations. The statistical analysis of the spectroscopy of these molecules can be adapted in the future to quantify aromaticity, which has been difficult to quantify universally thus far due to vague definitions.

We present results for surface temperature, metallicity ([Fe/H]), and surface gravity determinations with the first data from the Javalambre Photometric Local Universe Survey (J-PLUS). Spectra of stars with stellar parameters obtained from the SEGUE Stellar Parameter Pipeline (SSPP) were used in conjunction with synthetic magnitudes transformed to the the J-PLUS system to train an Artificial Neural Network (ANN). The ANN was then tested using the first J-PLUS sample data set. We discuss the implications of these photometric determinations on the identification of Carbon-Enhanced Metal-Poor stars, Blue Horizontal-Branch stars, and the Metallicity Distribution Function (MDF) of the Galactic Halo in the context of cosmic chemical enrichment and Galaxy formation.

The LHC has recently reported a slight excess in the h??? channel. If this lepton flavor violating (LFV) decay is confirmed, an extension of the Standard Model (SM) will be required to explain it. In this project we investigate two different possibilities to accommodate such a LFV process: the first scenario is based on flavor off-diagonal A-terms in the Minimal Supersymmetric Standard Model (MSSM), and the second is a model where the Higgs couples to new vectorlike fermions that couple to the SM leptons through a LFV four fermion interaction. In the supersymmetric model, we find that the sizes of the A-terms needed to accommodate the h??? excess are in conflict with charge- and color-breaking vacuum constraints. In the second model, the excess can be successfully explained while satisfying all other flavor constrains, with order one couplings, vectorlike fermion masses as low as 15 TeV, and a UV scale higher than 35 TeV.

Modern cosmology is built upon the premise that Cosmological Principle holds true on large length scales. The cosmological principle states that the universe is homogeneous at large length scales. Thus testing it through current observations is crucial for our understanding of the universe. In this work take quasar distribution from SDSS-DR10 and by fractal analysis test whether the universe is indeed homogeneous at large length scales or is it fractal like structured or completely in-homogeneous. Further random distributions, which are homogeneous by definition, are used to compare with the observed quasar data to verify the validity of our results. Homogeneity was said to be achieved when Quasar data agreed with random data generated.

There are roughly 25 very metal-poor, highly r-process-element-enhanced stars currently known in the Galactic halo. These stars, rich in neutron-capture elements, are vital in determining the astrophysical site of the r-process by providing observational signatures of nearly-pure r-process events occurring early in the evolution of the Galaxy. Herein we present the first such r-II star found with high-resolution spectroscopic follow-up of the RAVE (RAdial Velocity Experiment) survey in the ongoing effort to increase the list of known r-II stars. This first finding demonstrates the power of selecting r-II candidates to be observed with medium- and high-resolution follow-up using existing survey data. Additionally, not only is star the fourth such r-II discovered with detectable uranium, but it is also the brightest (V = 12) and most metal-poor ([Fe/H] = ?3.00) of the known “uranium” stars.

The short-lived radionuclide 36Cl (t1/2 = 0.301 Ma) is known to have existed in the Early Solar System (ESS), and evaluating its production sources can lead to better understanding of the processes taking place in ESS formation and their timescales. The X-wind model is used to explain 36Cl production via solar energetic particles from the young Sun, but is lacking empirical data for many relevant reactions. Bowers et al. (2013) measured the 33S(?,p)36Cl cross section at various energies in the range of 0.70-2.42 MeV/A, and found them to be systematically under predicted by Hauser-Feshbach statistical model codes TALYS and NON-SMOKER, highlighting the need for more empirical data for these cross sections. Recent results of the re-measurement of the 33S(?,p)36Cl reaction, providing greater coverage of the same energy range as Bowers et al., will be presented. Future plans for measurement of other 36Cl producing reactions will also be discussed.

Field and Temperature dependence of the superconducting anisotropy of Sr2RuO4

Measuring the Acceptance of St George

The St. George recoil separator located in the Nuclear Science Lab will be used to measure radiative alpha capture reaction cross sections of astrophysical interest. Low reaction rates at energies found in stellar environments inhibit standard measurement techniques due to a relatively high gamma background. Recoil separators aim to eliminate this background problem by directly detecting the heavy reaction products. In order to conduct accurate measurements, the properties of the separator must be well understood. A systematic measurement of the energy acceptance has been performed at zero degrees over the phase space of electric and magnetic rigidities of interest for St. George. These measurements will be reported on, along with the progress to determine the angular acceptance of the separator.

The St. George recoil mass separator at the University of Notre Dame will be used to study (?,?) reactions of astrophysical interest. A detection system was developed for the St. George recoil mass separator, in collaboration with Indiana University South Bend, that will utilize energy and time-of-flight to separate reaction products from residual unreacted beam particles. The detection system uses two microchannel plate (MCP) detectors, perpendicular electric and magnetic field are used to bend secondary electrons from the surface of a parylene backed carbon foil to register timing measurements, and a silicon strip detector is used to measure the ion’s kinetic energy. The performance of the detection system will be presented.

Pulsars apparently missing from the galactic center could be due to the accumulation of dark matter inside the pulsar. If sufficient DM is accumulated, it initiates collapse of the pulsars and can turn the pulsar into a black hole. Here, we consider a specific model with fermionic dark matter and a scalar mediator, and compare the parameter space required for pulsar collapse with constraints from direct detection and other experiments.

P-process nucleosynthesis occurs in supernovae where the s-process seeds are present, and is responsible for the production of proton-rich nuclei. Photons from SN explosions induce characteristic (?,n), (?,p), and (?,?) reactions. These reactions are typically studied via the inverse reactions. For this purpose, the High Efficiency Total Absorption Spectrometer (HECTOR), a NaI(Tl) summing detector at the University of Notre Dame, was built. The array is designed to make precision cross section measurements for (p,?) and (?,?) reactions. HECTOR is composed of 16 separate NaI(Tl) crystals and 32 photomultiplier tubes read by a digital data acquisition system, with gain-matching and summing done offline. The efficiency of HECTOR is about 52.7 (2.0)\% for a 60Co source. The commissioning run for HECTOR was performed via measurements of known resonances in the 27Al(p,?)28Si reaction to determine the efficiency of the array. The first results from HECTOR will be presented, as well as future plans with the array.

The U.S. currently has approximately 300 million liters of highly radioactive wastes. Tanks containing the high-level waste (HLW) are difficult to deal with given the hostile environment that accompanies the ionizing radiation. Aluminum is prevalent in the tanks and removal requires leaching the tank sludge with caustic chemicals at an elevated temperature. The dissolution of aluminum is greatly complicated by the presence of aluminum oxides and hydroxides, and thus understanding how these solids age in the tank is essential for safe processing of HLW.
Initial tests were conducted using Al(OH)3 powders irradiated at relatively low doses of 1-2 MGy and included dry and water-loaded samples. Determination of the number of water layers adsorbed onto the surface was extrapolated from nitrogen absorption using the BET method. The BET analysis revealed the presence of pores, which means the particle size calculation is larger than the actual size of the sample. Samples were degassed and flame-sealed in Pyrex tubes before being irradiated in a 60Co source. After irradiation, the Pyrex tubes were either cracked open to retrieve the sample or run through a GC to determine the radiation chemical yield of H2. The retrieved sample was mounted onto aluminum SEM stubs for XPS analysis to determine the chemical composition at the surface of the material. In general, the oxygen 1s peaks are shifted down in energy and the aluminum 2p peaks became narrower after irradiation. This observation is in line with what was seen with ?-irradiated alumina.
A temperature-dependent FTIR was done to observe water and contaminants on the surface. An additional measurement at room temperature after heating the sample up to 400°C revealed stronger OH signals as well as a spectrum shape more in line with the spectrum of alumina. Aluminum hydroxide is not stable at 400°C, and converts to alumina.

We appreciate your feedback! If you can’t view the form, click here. 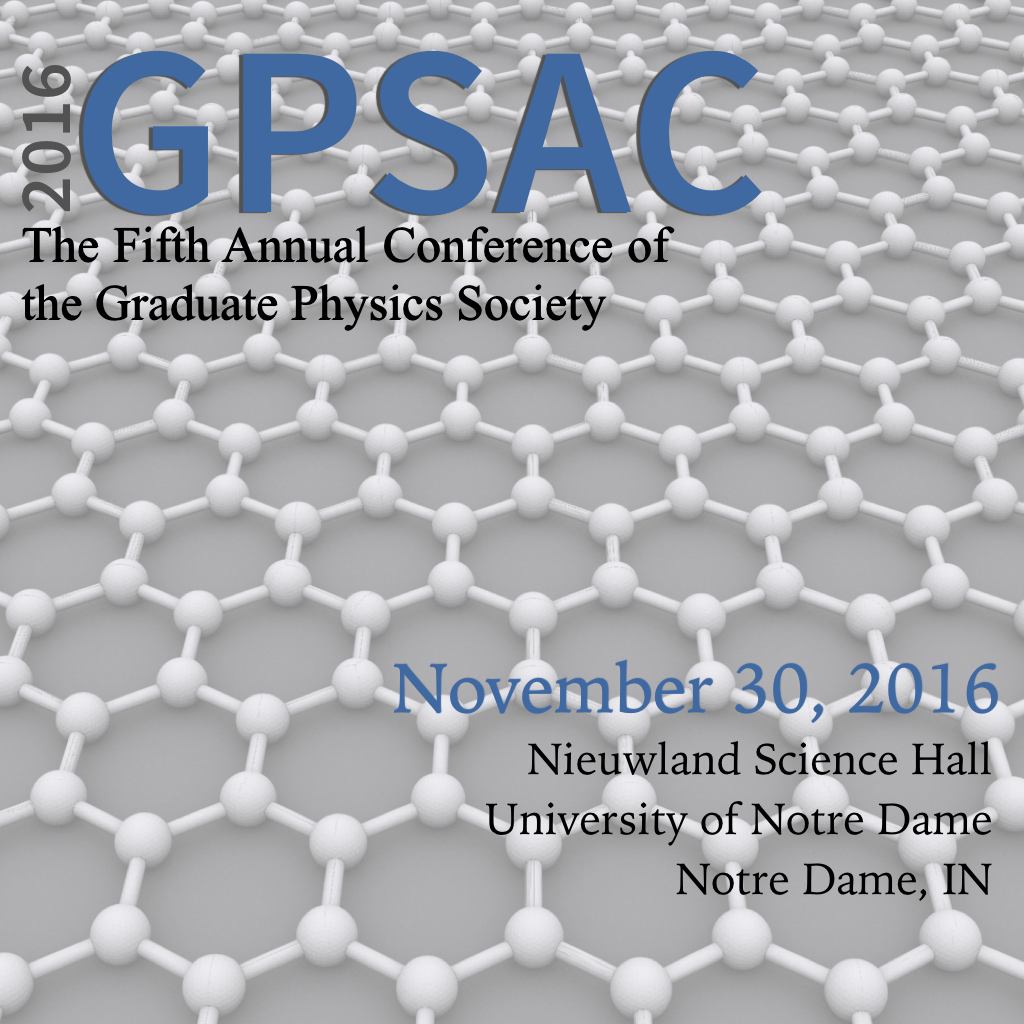 Please register here for the 2016 GPSAC. If you cannot view the form, click here.